Why IRAs Are a Good Deal

For all the complexity of IRAs, opportunities to save for retirement deserve serious attention.

A well-known actor once said that our biggest regrets are not for the things we have done but for the things we haven't done. The same could be said about the IRA, which turns 42 in 2016. While IRAs have grown into the single largest component of the U.S. retirement market, with assets totaling more than $7.3 trillion (as of September 2015), representing an estimated 30% of all retirement assets, according to the Investment Company Institute, only 12% of U.S. households made IRA contributions in 2013

Confusion surrounding who is eligible to fund an IRA may help explain why IRA annual participation has been stuck in the low double-digits of the eligible population for a number of years.

In reality, IRA eligibility is easy to satisfy: virtually anyone with a reportable earned income is eligible to fund an IRA. IRAs have the potential to offer an array of tax benefits, including tax-deductible, tax-deferred compounding. And one type—a Roth IRA—receives tax-free treatment if certain conditions are satisfied. IRAs also offer the potential to unfettered access to the funds before age 59½ without paying the 10% early-withdrawal penalty, as long as particular IRS criteria are met.

“IRA season” is generally considered to be from January 1 until April 15, when individuals can still fund their IRA for the prior tax year—making it an excellent time to review overall IRA eligibility rules. Here’s a quick guide to the key IRA options that potentially encourage your clients to save more for their retirement:

Traditional IRA
A traditional IRA is a tax-deferred savings account available to all individuals who have earned income and who are younger than 70½. Individuals who are under age 50 have an individual contribution limit of $5,500 in 2015 (same as 2015). Individuals who are age 50 or older can invest an additional $1,000 above this limit, under what’s commonly called a “catch-up” contribution. Contributions may be made at any time during the calendar year or by the tax-filing due date for that year, not including extensions (generally April 15).

A number of variables apply in order to determine whether a taxpayer is eligible to make a deductible IRA, including filing status, modified adjust gross income (MAGI), and whether individuals and/or their spouses are active participants in a workplace retirement plan.

For example, unmarried people who are not covered by a workplace retirement plan may deduct their entire contributions to traditional IRAs, regardless of their income. But for married couples filing jointly, if one spouse is participating in a workplace retirement plan, nonparticipating spouses may deduct their full contributions to a traditional IRA if the couple’s joint income is $184,000 or less in 2016. A partial deduction is allowed if the couple’s income is above $184,000, but does not exceed $194,000. (See Table 1 for eligibility.)

Once a traditional IRA participant reaches age 70½, required minimum distributions (RMDs) must begin, and the amounts withdrawn are generally included as income and subject to ordinary income taxes.

Required minimum distributions must be taken from traditional IRAs (as well as SEP and SIMPLE IRAs) no later than April 1 following the year that an investor turns 70½. An RMD must be taken in each subsequent year by December 31. Failure to take the RMD results in a 50% penalty on the amount that was not distributed.

Roth IRA
A Roth IRA is a potential tax-free savings account available to all individuals and their spouses who have earned income and meet maximum income thresholds established by the IRS. (See Table 2.) In addition, contributions can be made at any age so long as the income test has been satisfied.

Participation in a workplace retirement plan, other than lowering current income, does not affect Roth IRA eligibility. Contributions to a Roth plan are always made on an aftertax basis. There are no lifetime RMDs at age 70½ for either the account owner or a spouse beneficiary. All of this can provide the potential for tax-free growth and withdrawals as long as the Roth account remains open for five years and the distribution is made on or after reaching age 59½. Earlier withdrawals may be subject to a 10% penalty. Nonspouse beneficiaries inheriting a Roth IRA generally receive proceeds tax-free.

Roth Conversion
Almost anyone can convert pretax assets into a Roth IRA, even higher income-earning individuals, whose incomes preclude them from making Roth contributions in the first place. Investors can covert traditional IRAs, SIMPLE IRAs, or SEP IRAs to a Roth IRA by paying federal and (if applicable) state taxes on the amount that was converted in the year in which the conversion was completed. This may prove especially attractive to investors concerned about higher tax rates as they get older. (For a thorough discussion of Roth conversions, refer to our flier: “Roth Conversions: Frequently Asked Questions.”)

Individuals may find a Roth conversion attractive if they:

Rollover IRAs
Many 401(k) plan participants do not realize that a rollover to an IRA provides great flexibility and portability. Aside from the potential to bequeath IRA assets to heirs and to control how that legacy will be allocated (e.g., “stretch” IRA option), an IRA can be moved to another institution’s IRA or another qualified plan (as long as the plan allows). The account can be converted into a Roth IRA, which generally will eliminate further taxation. (Of course, there may be administrative fees and other costs involved with an IRA rollover.)

Making the Right Choice
Which type of IRA is right for you? Your financial advisor can help you decide. You also may want to consider the benefits of consolidating your IRAs with one financial institution. There’s less paperwork. It’s also easier to develop a balanced strategy; then assemble a diversified portfolio, monitor performance, calculate required minimum distributions, and track beneficiary options. 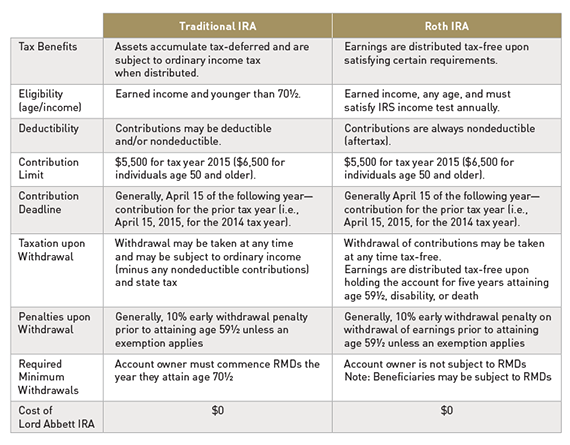 In summary, traditional IRA contributions (plus earnings, interest, dividends, and capital gains) may compound tax-deferred until you withdraw them as retirement income. Amounts withdrawn from traditional IRA plans are generally included as taxable income in the year received and may be subject to 10% federal tax penalty (in addition to ordinary income tax) if withdrawn prior to age 59½, unless an exception applies. As a general rule, withdrawals both on and after age 59½ that represent deductible contributions and all earnings are taxed as ordinary income. Withdrawals of nondeductible contributions made on or after age 59½ are tax-free. Contributions to a Roth IRA are not tax-deductible, but withdrawals during retirement are generally tax-free.

The information contained herein is general in nature, is provided for informational purposes only, is not individualized and is not intended to serve as the primary or sole basis for your investment or tax-planning decisions. Lord Abbett cannot guarantee that such information is accurate, complete, or timely. Laws of a particular state or laws which may be applicable to a particular situation may have an impact on the applicability, accuracy, or completeness of such information. Federal and state laws and regulations are complex and are subject to change. Changes in such laws and regulations may have a material impact on pre- and/or after-tax investment results. It is strongly recommended that you consult your legal or tax advisor in using this information regarding the application of such laws. 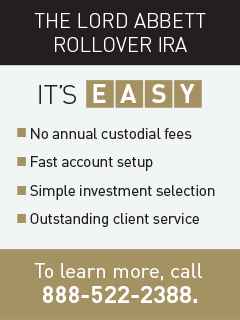 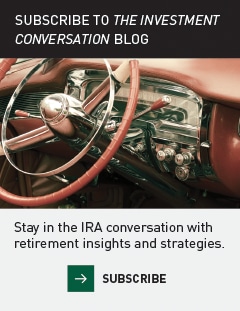