With the reinstatement of CPFF, the U.S. central bank may be signaling that it will continue to act aggressively and is considering all options to maintain the smooth functioning of markets.

The Commercial Paper Funding Facility (CPFF) 1 was created by the U.S. Federal Reserve (Fed) to provide a liquidity backstop to U.S. issuers of commercial paper during the 2008-09 financial crisis. The recent reinstatement of CPFF was a much needed pressure-release valve for liquidity strains in the short-term markets, and we believe that it was a strongly positive move for markets.

The strains that CPFF may help relieve were created by a combination of the violence of recent market moves (that seemed to diminish risk tolerance and altered investor behavior), and of the cash-hoarding behavior by both corporations uncertain about the length of the shutdown and banks with open lending lines. The market stress has resulted in much higher borrowing costs for corporations via the commercial paper (CP) and floating rate note (FRN) markets than one would expect compared to other markets.

Chart 1: The Market Stress Has Resulted in Much Higher Borrowing Costs for Corporations via the CP Market
30-Day Commercial Paper, trailing 1-year (as of March 16, 2020) 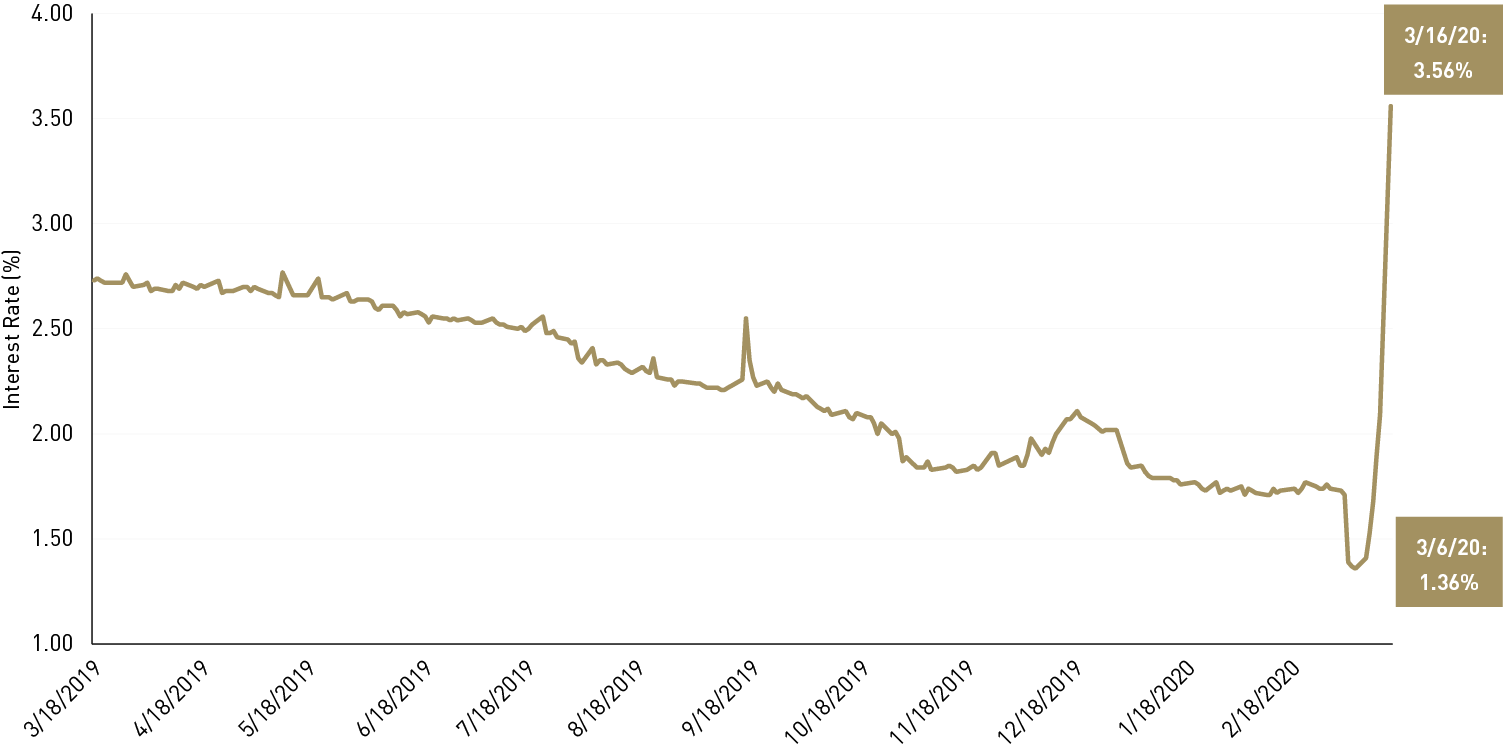 Normally, investors would jump at the opportunity to invest in CP or FRNs at current levels. Because of the market panic, however, these normal mechanisms have had insufficient time to adjust to the situation. Instead, the stressed valuations may have caused would-be investors to panic further, pulling money out of investment vehicles and creating additional pressure.

The CP market has become a critical stress point in the financial markets, with many quality issuers struggling to tap the CP market to get liquidity for short term funding needs. These borrowers are highly creditworthy. In many cases, they have also accessed longer term credit markets to borrow at lower levels, meaning that, for investors, their commercial paper offers higher yields for far less risk. However, the market has not yet been able to correct this valuation differential.

The CP markets are important for corporate operations and are also the underpinnings of many short term investment vehicles. While there has been no question about the creditworthiness of this paper, the money simply has not been available to fund this paper, creating a dynamic where companies are forced to fund certain operations inefficiently, while some investors may fear that the stress in these funding markets indicates deeper, but unseen, issues. This type of market stress can often spill over into other markets and ultimately into the broader economy.

The Fed’s move is a very important step in correcting this imbalance and in clearing up some of the blockage preventing the liquid allocation of capital to short term borrowers. We had hoped that the Fed would announce a move that directly injected capital and liquidity into the sector, yet the borrowing terms are not materially better than investors already have. Very importantly, though, this facility provides a backstop for funding for these companies, should they reach a point of stress in the future – i.e., it also backstops lenders who can be confident that these companies will not face solvency issues even if their outlook deteriorates.

Ultimately, we believe the CPFF should help to stabilize more than the CP market; it should help other stressed areas in the short-term debt markets, such as the FRN market, which should benefit from increased capital in the market, and the relative comparison to the CP market.

It is unclear to us if this move will be sufficient, by itself, to fully remedy this imbalance, as much of the technical pressure on short-term bonds is related to the confidence of retail investors who may not immediately appreciate the connection of the Fed’s move with asset pricing. However, it certainly helps confidence for many institutional actors and banks. Moreover, in our opinion it indicates that the Fed will likely continue to act aggressively and is considering all options to maintain the smooth functioning of markets.

We believe the $10 billion in capital as a loss cushion that was announced as the backstop for the lending facility will be more than adequate to give the Fed ammunition to buy as much CP as it feels is needed. Moreover, we see the inclusion of downgraded paper in the universe of eligible borrowers was a positive surprise.

Markets did respond positively, with trading volumes increasing a bit, although it will take some time for the program to actually draw additional capital into the space, renew investor confidence, and to correct these imbalances. Given enough time, we believe this backstop would be fully sufficient to generate adequate investor confidence. However, given the speed with which the news cycle is unfolding, we believe it is likely that there will be further actions taken by the Fed should there be additional stress.

1 The Commercial Paper Funding Facility (CPFF) was created by the U.S. Federal Reserve to provide a liquidity backstop to U.S. issuers of commercial paper. The CPFF was intended to improve liquidity in short-term funding markets and thereby contribute to greater availability of credit for businesses and households. Under the CPFF, the Federal Reserve Bank of New York financed the purchase of highly rated unsecured and asset-backed commercial paper from eligible issuers via eligible primary dealers. The CPFF began operations on October 27, 2008, and was closed on February 1, 2010.

Commercial paper is a commonly used type of unsecured, short-term debt instrument issued by corporations, typically used for the financing of payroll, accounts payable and inventories, and meeting other short-term liabilities.

The views and information discussed in this commentary are as of the publication date, are subject to change, and may not reflect the views of the firm as a whole. The views expressed in market commentaries are at a specific point in time, are opinions only, and should not be relied upon as a forecast, research, or investment advice regarding a particular investment or the markets in general. Information discussed should not be considered a recommendation to purchase or sell securities. 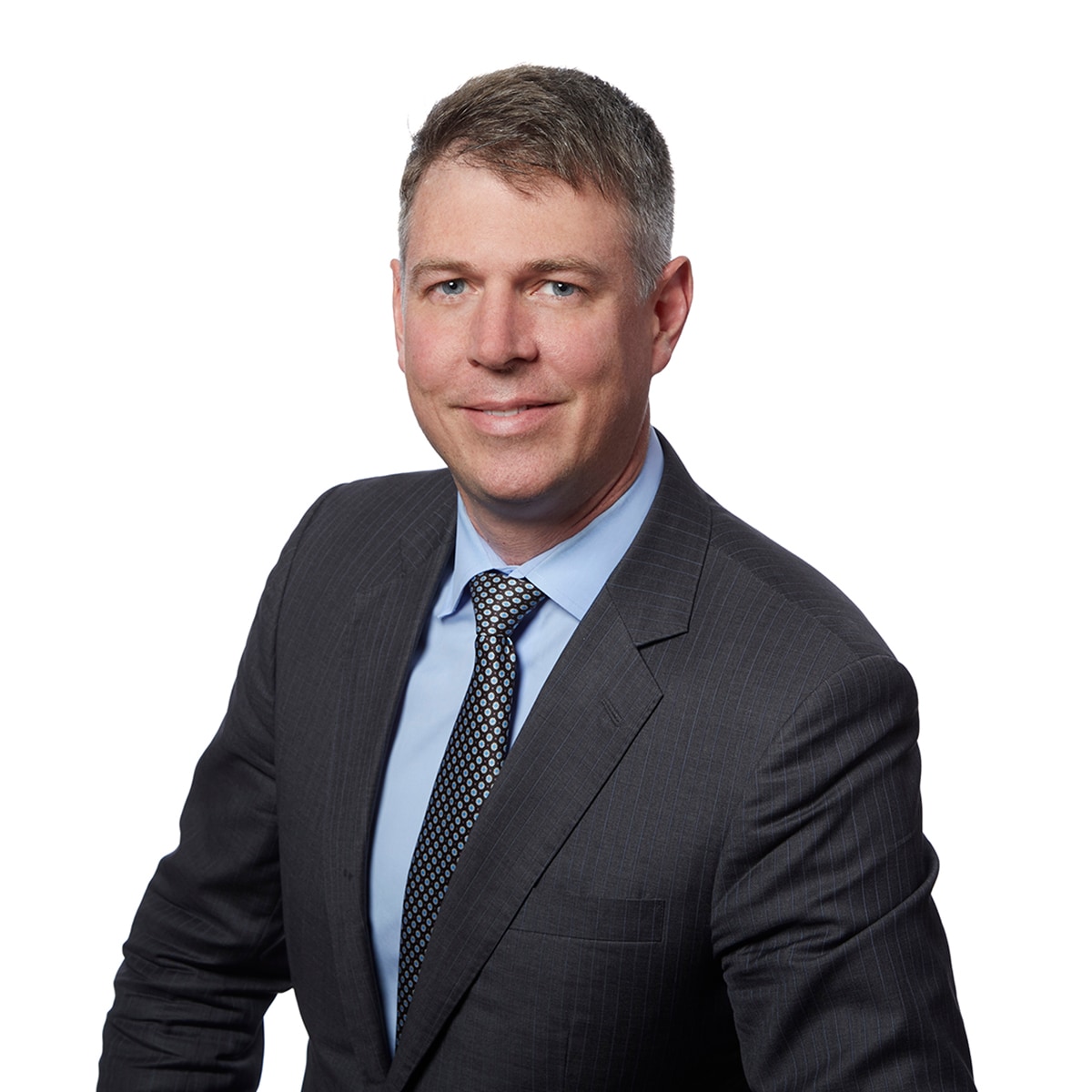