When it comes to charitable donations, “lumpy giving” may be a tax strategy that makes sense, given the increase in the standard deduction.

When the Tax Cuts and Jobs Act (TCJA) raised the standard deduction in 2018 (from $6,350 to $12,000 for individuals and from $12,700 to $24,000 for couples filing jointly), many U.S. households found they were unable to itemize enough deductions, including donations to charity, to exceed the new standard deduction amount.

While most people would agree that tax benefits are not the primary reason for charitable contributions, it’s clear that lower tax rates and nearly doubling the standard deduction thresholds make itemizing routine donations to charities and churches less attractive.

The Tax Policy Center projects that charitable donations overall could decline by about 5% from 2017 levels, with smaller organizations bearing the brunt of the shortfall.

But all is not lost.

Giving in “Lumps”
Households who donate to charity every year, and find that itemized deductions under TCJA are almost large enough to actually itemize the deductions, should consider charitable lumping (also called bunching). This is the idea that households front load several years’ worth of giving in one year so that itemized deductions exceed the standard deduction in that year, and then simply claim the standard deduction in the following year(s). In this way, households can save their donations up so that their gift has the largest impact on the taxes they owe.

Donor Advised Funds
Some people like the idea of a lump-sum contribution but want to ensure that funds are dispersed over multiple years so that the charity has on-going support. A Donor Advised Fund (DAF) may be the solution.

Chart 1.  A Donor Advised Fund Allows the Donor to Manage the Dispersal of Funds Over Time 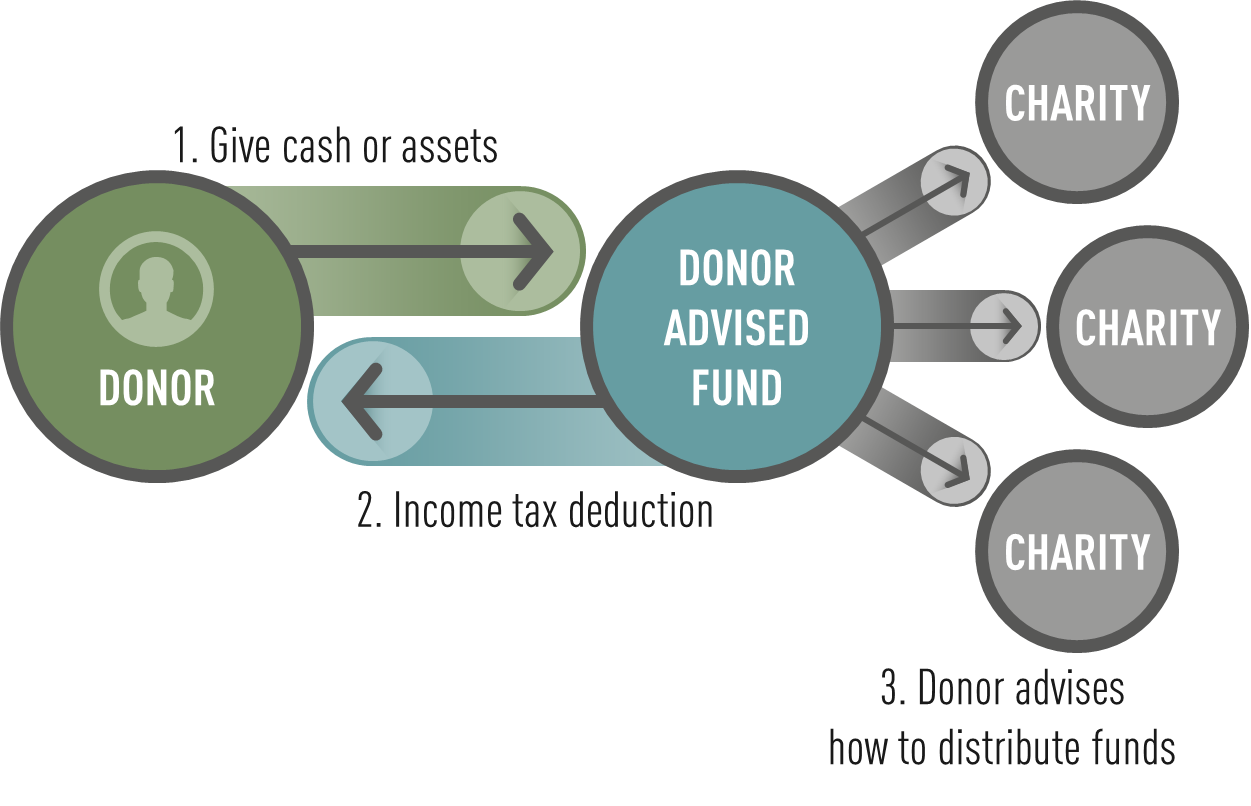 A DAF is a special type of investment account that is maintained and operated by a qualifying 501(c)(3) charitable organization. It allows donors to make a lump-sum charitable contribution, receive an immediate tax deduction, and then direct disbursements from the fund over time. (The future disbursements would not be allowable as a deduction since the donor already got one when he or she contributed to the DAF itself.)  So combining a DAF with “lumpy” charitable giving would allow consistent annual distributions to your favorite charities, while potentially providing additional tax benefits for you.

As always, individuals should seek the advice of a professional tax advisor before determining the most tax efficient approach for charitable giving that suits their needs.

The opinions in the preceding commentary are as of the date of publication and are subject to change. Additionally, the opinions may not represent the opinions of the firm as a whole. The document is not intended for use as forecast, research or investment advice concerning any particular investment or the markets in general, and it is not intended to be legal advice or tax advice. This document is prepared based on information Lord Abbett deems reliable; however, Lord Abbett does notwarrant the accuracy and completeness of the information.

The information is being provided for general educational purposes only and is not intended to provide legal or tax advice.  You should consult your own legal or tax advisor for guidance on regulatory compliance matters.  Any examples provided are for informational purposes only and are not intended to be reflective of actual results and are not indicative of any particular client.